Depression in Men: Symptoms, Treatment, and How to Get Help

In earlier ways of thinking, depression, as well as other mental health issues, were believed to be something that only women struggled with. That, however, proved to be untrue. In America today, more than six million men grapple with the effects of depression. However, the stigma remains, and men tend to internalize their struggle more than their female counterparts, leading to disastrous results.

While depression in men is hard to diagnose, if you are honest and ready to confront the problems you are facing, help is available. There are many ways to alleviate symptoms of depression, and a rich, full life is achievable after seeking help.

What are the symptoms?

These are typical for men and women to experience. However, men tend to feel more irritable and aggressive while women feel more sadness and worthlessness.

Why is depression more common in women?

The truth of the matter is that depression is not more common in women. Depression affects approximately the same amount of men as it does women.

Due to American culture, men are less likely to admit to their problems and seek help due to the idea that being a man means being strong. Men will more readily discuss the physical symptoms of their depression with their doctor rather than the emotional issues they may be experiencing.

What are the symptoms of depression in men? 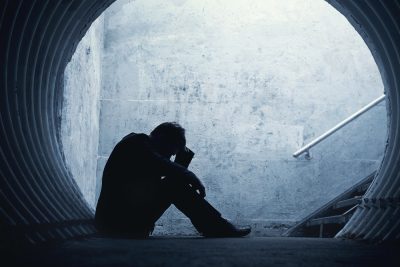 In men, there are a few specific symptoms that can be attributed to depression.

Thoughtless and wild behavior can be a sign of depression in men. Driving recklessly, binge drinking, substance abuse, and gambling are all tied into this behavior.

Men with depression are also prone to bursts of anger. This can manifest in abusive or manipulative behavior, but also in irritability, a short temper, or a loss of humor.

Depression can also cause men physical pain. These symptoms, however, do not respond to typical treatment. Some symptoms may be an aching back, headaches, problems within the digestive tract, or sleep problems.

What is the cause?

Depression is very common in America today. There are some causes that have been found by research, but you may still have depression if none of these apply to you.

Genetics play a role in developing depression. Men who have a family member with the disease are more likely to develop it themselves in some cases.

Stress is also a factor. Major life changes, problems at work or home, grief over the loss of a loved one, and trouble with finances can all trigger depression in some cases.

A serious medical diagnosis may also have depression as a side effect. Depression can make the primary disease feel worse and vice versa. Medications to treat certain diseases can also cause depression. Talk to your doctor. Some of these illnesses may be cancer, heart disease, diabetes, or Parkinson’s disease.

How is depression treated?

Treatment for depression can vary. Many times, a combination of therapy, medication, and lifestyle changes are necessary to alleviate symptoms. However, sometimes just one of the treatments work will on their own. Each case is different.

In mild cases, a change in lifestyle alone is enough to relieve the major symptoms of depression. Exercising daily, eating a nutritious diet, and developing a sleep routine can help. Consult your doctor before embarking on a lifestyle change.

The next step is therapy. There are several types of therapy that can aid in treating depression. Cognitive Behavioral Therapy, for instance, can help replace harmful habits with good and productive ones. Therapy can also help those with depression cope with other issues of life, such as stress, anger, and navigating relationships.

Medication can be necessary in more persistent cases. Medications for depression change chemistry in the brain in order to reduce symptoms of depression. However, it is important that you monitor your mood while on medications, as patients don’t always react the same way to the same medication.

In severe cases, hospitalization can help keep depressed patients safe until the worst of their depression is over. This is particularly helpful in cases of suicidal thoughts or actions.

Do I have depression?

If you have any of the symptoms listed above, consult your doctor. Depression can affect any man at any age at any time. With the right changes and treatment, a normal life is achievable, and you can enjoy your work, family, and hobbies again in no time.

Remember that depression is an illness, and it is not something you can easily ignore or change just by will. It is also important to remember that there is no weakness in talking about emotions.

How can I help?

Spending time face-to-face with friends and loved ones is a great beginning to dealing with depression. Social media and texting are excellent tools, but face-to-face time is invaluable. Keeping up with these social interactions even when you do not want to is also really important.

Exercising more and regularly can have a lasting impact on mood. Exercise releases endorphins, leading to a better mood. Exercising outside in the sun is also good for boosting serotonin levels in the brain, relieving depression symptoms. It will especially help with fatigue symptoms.

Keeping some kind of daily routine helps keep stress lower and depression manageable. Aim to go to bed at the same time every night and try to sleep for eight hours.

Avoiding alcohol and drugs can also help. Because men are less likely to discuss their feelings, they tend to use substances to cope with these emotions. Many men will not go to a doctor or discuss symptoms with friends or family, and instead try to self-medicate with drugs, alcohol, or other wild behavior.

What if I have a crisis?

Call your doctor or 911 in an emergency. There is also a toll-free, 24-hour hotline of the National Suicide Prevention Lifeline at 1-800-273-TALK.