The JUUL of the Vape Aisle

Contents show
1 Health Benefits of Vaping
2 So What Is The JUUL?
3 JUULs vs. Other Vaporizers
4 Who would and wouldn’t Want to use a JUUL
5 JUUL Controversy

Technology is advancing at a breakneck speed nowadays, making it difficult to keep up with every breakthrough. Things that would have been thought of as science fiction just a generation ago are becoming more and more commonplace in society. Perhaps the very most strikingly apparent indicator of the futuristic society we find ourselves in is the rise of e-cigarettes. Kicking the once ubiquitous habit of smoking to the curb, more and more citizens every year are choosing to plug their smoking devices in. The JUUL is the latest emerging trend in the quickly evolving sphere of vaping, a hobby which is quickly replacing less healthy alternatives.

It’s undeniable that smoking numbers are trending downward. Nearly every developed nation reports lower and lower amounts of smokers every year, especially among younger demographics. It’s not a certainty, but it’s very likely that a strong contributor to that trend is the availability of e-cigarettes. However, some people have expressed distrust of the growing habit, since inhaling anything regularly can be a potential safety issue. So where does science stand on vaping? 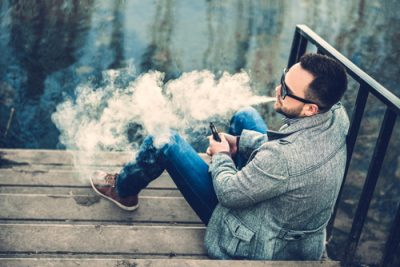 All vapes still contain nicotine, which is not a healthy chemical in the first place, and it is addictive. However, cigarettes contain a whole lot of substances and chemicals beyond nicotine that also do damage. Vaping doesn’t have those. Furthermore, when you burn a substance, you create unhealthy carcinogens, something that is impossible to avoid no matter what you are smoking. Since vaporizing never ignites any matter, no carcinogens are ever created. Overall, there is relatively strong scientific consensus that e-cigarettes are, if not 100% healthy, are certainly much healthier than traditional cigarettes.

So What Is The JUUL?

The JUUL is the newest trend in the e-cigarette industry. While e-cigs are not very new, this apparatus is raising a few eyebrows. The JUUL is shaped like a USB drive, causing them to be more discrete and difficult to spot. As such, JUULs are the e-cig of choice for anyone who wants to vape without being noticed, or use their e-cig in places where they otherwise wouldn’t be able to. JUUL’s aren’t devoid of opposition, however, as some people have voiced concerns that they may be too accessible and concealable to kids, presenting a potential health crisis to the youth of America

JUULs vs. Other Vaporizers

There a few key differences that make the JUUL different from other types of vaporizers. The most apparent and the JUUL’s biggest selling point is the sleek size. Just barely larger than a cigarette and smoked in a very similar way, JUULs are just about the most well designed, the lightest, and the least bulky option for vaping. You can even leave a JUUL in your mouth between drags like you would a traditional cigarette.

The JUUL also contains a few other differentiating aspects. It has a temperature control system internally, so you don’t need to change the temperature to get the perfect hit. It will self regulate the temperature. This internal regulation system not only makes vaping more satisfying, it also averts the potential danger of a tank exploding from overheating. Similarly, there is no loading system for the vape oil. You need to order specific cartridges, or tanks, from JUUL directly. Fortunately, JUUL has a wide selection of flavors available that should be able to satisfy just about anyone. It takes about an hour to charge, which can be easily accomplished by plugging into anything with a USB port, even a laptop. Once fully charged, it will last for approximately 200 puffs.

Who would and wouldn’t Want to use a JUUL

The JUUL is sleek, simple, and minimalist; it is the Apple product of the vaping world. That has all the advantages, and disadvantages, that come with the implication. JUULs are a primary product for those who don’t want to have to think about it. Pop in a tank, charge it up, take it out, and puff. There are those, however, who wouldn’t appreciate the simplification. The Linux users of the world, who’d rather test different temperature ranges, mix different flavored oils, modify their vape, tweaking in constantly to enhance their experience. This can only be done with a bulkier vaporizer.

Savvy readers may at this point already anticipate the most controversial aspect of the JUUL. With its reliance on new technology, easily concealable size, and the ability to use it discretely, many worry that JUULs are becoming the vape of choice of underage users and students. The wide variety in flavors, some of which are fruity or sweet, is also feared to be a draw for children. Since nicotine can be extremely detrimental to a developing child, this is a significant danger. Parents and teachers should make themselves aware of what the JUUL looks like, and be vigilant against their children or wards using them.

Fortunately, though the JUUL is definitely favored by younger people, this largely encompasses college students more than it does high school students, particularly because JUULs are not sold to anyone younger than 18. Anyone who went to a college campus even ten years ago, however, will tell you that this is no real change to the status quo. College students have always smoked at a higher rate than the average population, so the switch to vapes and, specifically, JUULs isn’t necessarily indicative of any sort of downturn.

Hopefully you now know better if the JUUL is for you or not. If you want to be able to tinker and test and mod your gear, then you should probably look elsewhere. But if your aim is to be able to reach into your pocket, pull out a relatively healthy smoke, take a drag, and put it away without thinking any more of it, then the JUUL is perfect for you. Just remember, even though it’s far safer than cigarettes, nicotine is still potentially harmful, and should always be kept in moderation.

How to Dress for a First Date

How To Run Your Own Life