Contents show
1 What Exactly Does Music Do to The Body When Having Sex?
2 How to Set the Mood

Since the 1960’s “sex, drugs and rock ‘n’ roll” mentality has been popular amongst younger groups of people. While most adults view these kids as crazy, they might be on to something.

In recent studies, scientists have found that music and sex activate the same part of the brain, this is not to say certain recreational drugs don’t do the same, but that isn’t what this is about!

Yes, that’s right, sex, recreational drug use and music all access the same chemical system in our brains. This chemical system produces dopamine, the happy chemical, that then creates euphoric feelings within the body that some street drugs try to mock up. It’s no wonder dosing up on sex and music has the potential to increase the success of your sex-life.

What Exactly Does Music Do to The Body When Having Sex? 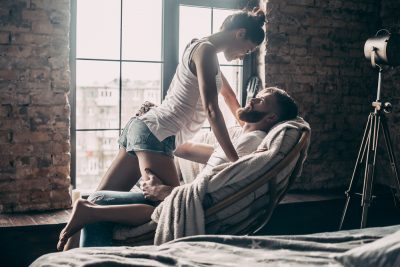 When music first enters our brains an immediate rush of dopamine is triggered, this causes us to feel an immediate peak of dopamine in the body. This dopamine release is key in having sex as it brings about the feelings of euphoria that we all know and love so well.

Energy levels are also raised when music is played while having sex. If you put on your favorite tunes while having a special night, you can almost guarantee your sex may last longer.

So, yes, dopamine is the key component for an erection to happen. With multiple stimuli like physical touch and music, dopamine levels are increased more than they would be with just one, making for a more euphoric, longer lasting erection.

How to Set the Mood

Music choice is everything. If you don’t know the person you are sleeping with well enough, it might be a total shot in the dark, but it is always important to find the exact vibe of your company.

When it comes to what to play, it all depends on what you are going for. For example, if you are looking for a sensual, smooth evening, give Feist, Portishead, and Thievery Corporation. When the evening feels fiery and like turning things up a little hotter might be a good idea, check out artists like Tool, Chevelle and A Perfect Circle.

Avoid music that brings up too much negative emotion, whether it is too melancholy or too angry, that is definitely not a way to set the mood for a night in with your lover.

Volume is next on the list. If you have the music too loud neither of you will have the energy to focus, and if it is too quiet the music will not take its full effect on the both of you.

The Link Between HIV and Hypertension